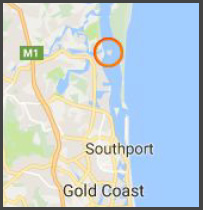 Ephraim Beitz was a fisherman from Labrador and is widely believed to be where the name came
from.

Set in the broadwater, just off of Paradise Point, Ephraim island has been a bubbling opportunity for decades with the first bridge connecting it to the mainland being built by the developers who took over it back in the 1970s. Ephraim island really came to life just a short time ago in 2008 and was once home to nothing but mangroves.

The very Southern end of Ephraim island is still undeveloped salt mud-lands but the remainder of the island has been developed into luxury residential apartments, villas & homes, all with waterfront frontage and home to around 500 residents.

To top the luxury feel off, the marina attached to it has space for 115 vessels, a restaurant and a day spa.

Next – Check out Sovereign Island below