Access: By ferry – Port of Brisbane -> Tangalooma. By Boat – beach wherever safe!

A wild version of North Straddie, Moreton island is similar in land size but has no sealed roads.  Instead, locals & visitors use sand tracks to move around the island by boat!  When Captain Cook landed on the island in 1770, he thought it was part of the mainland and named the headland Cape Morton but it was Matthew Flinders who officially named the island, albeit incorrectly, Moreton Island in 1799. 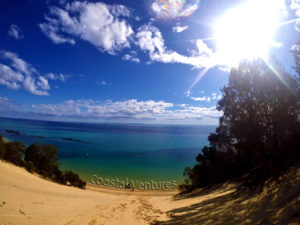 The first thing you will come across if travelling from the mainland to Moreton Island is the Tangalooma wrecks which form the island’s main anchorage.  In 1963, recreational boaties called for a safe place to anchor so the government elected to sink old harbours, dredges & barges.  This also encouraged sealife to give the island another tourist attraction, in the name of snorkelers.

The current at this point can be extremely strong as the tide changes, making it difficult but not impossible to anchor.  The wrecks are close enough to the beach that when the current is weaker, snorkelers can simply swim out to the wrecks. 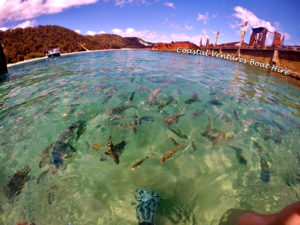 Up on the North East corner is what is known as ‘Champagne Pools’ which is a part of the island where volcanic rock sits at the same height as the ocean, giving people a pool to watch the surf come crashing over and bubbling down the rock into the pool.

Further round on the Western side is the Blue Lagoon.  A gorgeous freshwater lake, it’s unusual in that it’s only water source is the rain.  Most lakes will have small feeder rivers or streams but the Blue Lagoon is completely surrounded by sand and saltwater.

Finally, on the South Eastern shore are World War 2 relics, mostly buried by sand but Fort Rous still stands above for you to explore.  During WW2, Moreton Island was a first line of defence for Brisbane with various fortifications made around the island.  Anti tank guns & weapons pits were put at Honeymoon Bay, topped off by two large defence batteries being built at Cowan Cowan & the one still visible on the Eastern side.

Next – Check out Bribie Island below