Access: By ferry – From Redland Bay.  By boat – Beach where safe. 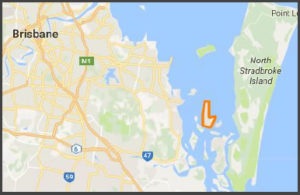 Macleay island sits between North Straddie & the mainland, just North of Russell island and is slightly smaller in size.  Home to 3,500 people, the average age is 51 so similar to Russell Island, has the older population and again, isn’t geared towards tourism as much as other surrounding islands.

At the Southern end of Macleay island, the remnants of a sugar mill built in the late 1800s are now part of the Queensland Heritage Register and serve as one of the first records of activity on the island.

Nowadays, it has a mix of sealed and unsealed roads connecting the villages to the major parts of the island including the ferry terminal.

Next – Check out Coochiemudlo Island below