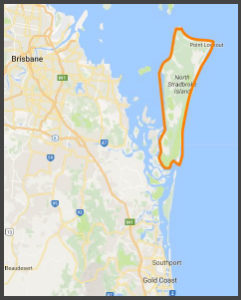 North Stradbroke island is by far the bigger in terms of size & infrastructure, with sealed roads and a population of just over 2,000 people.  Even after the split with South Straddie, it is the second largest sand island in the world, with an area of 275km2 to it’s name.  The three towns across the island, working from West to North are Dunwich, Amity Point & Point Lookout.

There are numerous attractions on North Straddie, the majority being based around the 3 towns including camping, 4WD beach driving & fishing.  During the months of June through until October, Point Lookout on North Stradbroke island is one of the world’s best whale watching lookouts on land as you’re 35m above sea level and the whales come past just 20-30m away.

Along with tourism, North Stradbroke’s other main trade is sand mining but due to ecological opposition and cultural significance, sand mining on the island is due to cease in 2019. 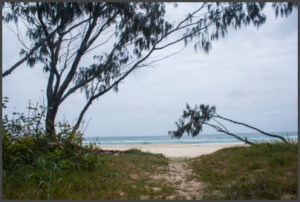 Another interesting story is that of the Stradbroke Island Galleon.  Although Captain Cook is widely known to have discovered Australia in the 1700s, a corroded coin dated 1597 was found buried in the 18 mile swamp on the island.  This reignited the rumours of a Spanish or Portuguese galleon buried in the swamp.

Aborigines would take Europeans to the shipwreck due to their nature of hospitality but the last remaining evidence of this was a man named Frank Boyce.  Frank lived on the island in the 1920’s and was taken to the shipwreck by Aborigines after he saved one of them from drowning.

The Aborigines are said to have been taking the gold from the shipwreck for years to pay for things in their town and they wanted to share this with Frank as a thank you.

Next – Check out South Straddie below