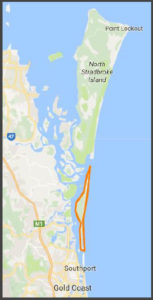 South Straddie is a lot smaller than it’s big brother, measuring just 21km in length and is easily visible from the mainland.  In fact just 250m away at the Southern tip from The Spit.  Various watersports allow locals to get across to it, be it kitesurfing, kayaking or by boat.

The ocean side of the island is renowned for the great surfing conditions and the lack of access makes sure that it is one of the surfing hotspots of the Gold Coast.  Abbreviated to TOS (The Other Side) – surfers often throw caution to the wind and paddle across the busy seaway to get to the island.  There is a water taxi service that takes surfers across but this has been controversial as surfers want to keep this break much more of a ‘local’s’ spot – if you can’t or don’t want to paddle across the dangerous, shark infested Seaway then you shouldn’t be allowed to surf the break is their opinion.

The anchorages available give you access to perfectly calm waters, somewhere to anchor or beach the boat before kicking back on the remote island to get away from the hustle and bustle of life.  At the very Northern tip, Jumpinpin provides a nice bar at low-mid tide to beach on and walk across to the towering sand dunes to get a good 360 view of the island and the skyline of the Gold Coast looking South.  Perfect spot for pumping yabbies too!

A little further South but easier to get to at mid-high tide is ‘The Bedroom.’  Unfortunately not the sleeping kind but a gorgeous little tucked away piece of heaven, again a tall sand dune allows you to get up above the mangroves and reveals a great view of the Hinterland, the Broadwater, the island & the skyline of the Gold Coast. 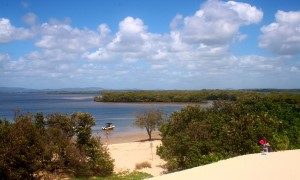 Drifting down South a bit more, a heritage listed hut, named Dux hut is a throwback to the Oyster farming days of Moreton Bay.  Moreton Bay was huge for the Oyster farming industry, peaking towards the end of the 1800s but when the Jumpinpin channel finally formed after the shipwreck & cyclones, the channel had a drastic effect upon the Oyster farming in the area.  In 1928, Freidrich Carl August (Augie) Dux obtained the licence to the Oyster bank here and built the hut 2 years later in 1930 for him and his sons to live on South Stradbroke island.

It was later found, by studying early maps that this was the same oyster bank that Henry Tippler worked in the late 1800s.  Henry Tippler was a great influence upon the Oyster farming boom in Southern Moreton Bay, leading to the naming of Tippler’s passage, Tippler’s island & Tippler’s cafe.

Next up on our journey South is McLaren’s landing & Tipplers licensed cafe.  Both have stunning tropical backdrops & themes, serving food & drink 7 days a week, they’re a perfect place to stop in.  Early in the morning you can get lucky and have breakfast with the local Kangaroos and Wallabies that roam around, completely used to human contact.

Public pontoons allow for easy access at either of these destinations, albeit for a short time as they can get very busy.  When we’re there in one of our hire boats or on a boat tour, we simply beach it and jump straight out onto the beach.

Tipplers also has campgrounds for you to camp out overnight without having to rough it too much, easy access to the cafe for a drink or two to help you get to sleep at night.

The final stop off on South Straddie is the Southern tip, where you’ll find two campgrounds – North & South Currigee.  Both have gorgeous beaches and various amenities to ensure you have a great trip.  These are the most popular camping locations for people that hire a tinny from us for weekend camping trips.  Just 10 minutes away from Runaway Bay by boat and they have access to the surf & Wavebreak Island.

Next – Check out Moreton Island below