What you may know now as North & South Straddie used to in fact, be one island joined at what we now call the Jumpinpin bar, simply named Stradbroke Island.

But in 1894 The Cambus Wallace, a 1,500 tonne ship on a voyage from Scotland to Moreton Bay, got caught in an almighty storm and became wrecked just 180m from the beach.  Part of the ship’s cargo was dynamite which was detonated at the shore and is said to have severed the sand dunes of Stradbroke Island leaving behind a small channel. 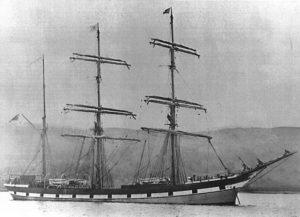 Coupled with a cyclone in 1896 and the strong tidal flow of the area, the channel went from being 20 feet long to over a mile by 1898, just 2 years later. This is why we now have the split between North & South Straddie.

The shipwreck is now inaccessible due to sand movement that has completely covered the ship, but in the 1970s a diver managed to recover the bell whilst on a recreational dive.

The name of Stradbroke Island came around in 1827 when the first British warship to enter Moreton Bay was commanded by Captain Henry John Rous.  Cpt Henry however decided to name it after his father, the Earl of Stradbroke who was still back in the UK.

Next – Check out North Straddie below