Wavebreak Island is part of the Gold Coast Seaway project to stabilise the beaches and sand masses around the Southport bar.  Before this project, the entrance to the Nerang River (what we now know as the Seaway) was shifting North at a rate of up to 60m per year, meaning any settlements were simply being washed away.

Around 200 years ago, the river mouth was as far down as where The Star Casino now sits in Broadbeach and it was estimated that by 2050, the mouth would be opposite Runaway Bay!

In 1983, the Government drew up plans to stabilise this to stop the destructive nature of the ocean from wiping out towns.  But unfortunately in 1984, the small town of Moondarewa which used to sit at the bottom of South Stradbroke Island was washed away by the ocean.

The project aimed to create two rock walls to stop the sand from shifting and form the entrance into the Broadwater but due to the cyclonic weather we have here on the Gold Coast, this would then lead to the mainland taking the brunt of the ocean swells.

This is where Wavebreak Island came in, using the sand dredged in the construction of the Seaway, Wavebreak Island forms a barrier between the ocean and mainland, protecting it from the powerful tidal conditions that the ocean can unleash during stormy weather. 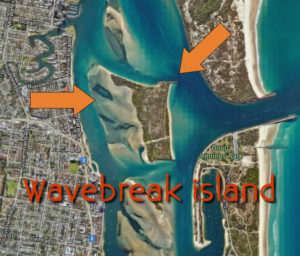 Wavebreak Island is now a hotspot for boaties on the Gold Coast, the Key at the South West corner is a great anchorage thanks to it’s depth and shelter from the ocean swells.  The Northern beaches offer protection from any Southerly winds and on the North Eastern corner there is a hive of activity going on for snorkelers and freedivers around the rock wall.

The island is a great stop off if you’re on one of our hire boats heading down to Surfers & the Nerang River.  The experience of being on a remote sand island yet still just a stone’s thrown from land is a strange one to say the least.

Next – Check out Stradbroke Island below