If you own a boat or have ever looked at buying one, the engine on it will have been described as either a 2 stroke or a 4 stroke.  In this post we’ll have a quick look at the mechanical differences for those that are interested or just skip down to the characteristics if that’s all you’re looking for. 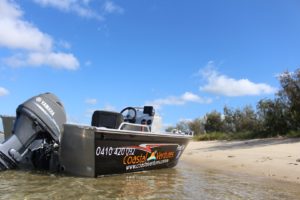 There are 4 basic stages of how an engine makes power – 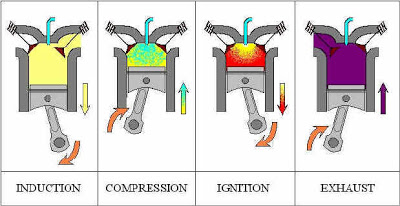 The above image is how a 4 stroke outboard works, it has a stroke (up or down movement) for each stage of the process.

A 2 stroke outboard still has to have the 4 stages but combines them into just 2 strokes (As the name would suggest…) which are. 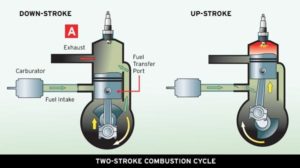 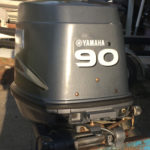 One of the reasons for their lighter weight is that the flywheel can be made lighter.  The flywheel is the part that effectively stores energy and delivers it much smoother instead of a big jolt followed by nothing.  4 stroke outboards have to have a heavier flywheel in order to balance out the fact that it only gets 1 kick every 4 strokes whereas the 2 stroke gets powered every 2 strokes instead.

This is why 2 strokes are used in handheld, portable things like chainsaws, lawn mowers and on smaller boats.  The 4 stroke also has a lot more extra parts & complexity that adds to the weight of it.

Obviously a 2 stroke 60HP has the same power as a 4 stroke 60HP but it is how that power is delivered that changes.  As the 2 stroke is firing (igniting the fuel mix) a lot more often, it becomes a lot more responsive and generally a bit more ‘zippy.’

The 4 stroke outboard is more complex with intake & exhaust valves, a heavier flywheel and a few other considerations.  This means that the 2 stroke engine is simpler to build, and simple to build means cheaper to buy. 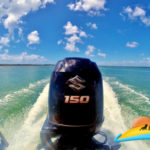 You can see in the images above of the 2 stroke engine that the fuel is being transferred into the chamber at the same time that the exhaust port is open.  This inevitably means that some fuel will be escaping before it gets burnt.

Not only does this lead to wasting fuel but that’s also why 2 strokes tend to be smokier with the smell that everyone knows is a 2 stroke smell!  If you’re planning on taking kids or family out then this is definitely a biggy as if you’re downwind of the motor then you will almost be able to taste the fumes.

The 4 stroke on the other hand is more complex and advanced in its technology to minimise any fuel loss, giving it a much more efficient burn rate despite the added weight.  So a trip to across to Straddie will use a lot less fuel with a 4 stroke than with a 2 stroke engine. 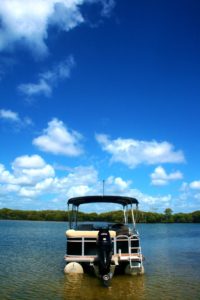 As the 4 stroke is not firing as much as the 2 stroke, you don’t get that annoying high pitched noise that you hear on 2 stroke engines.  That noise that is familiar to anyone who has used a chainsaw or mower before.

So you’ll find that 4 stroke engines are very quiet and also produce a lot less vibration when idling.  Customers often don’t even realise that the 4 stroke 150HP we’ve got on the back of our performance pontoon hire boat is running when it’s idling!

No extra oil in the fuel

2 stroke engines need you to add a bit of oil in with the fuel at every fill up.  This is because the fuel & air mix surrounds the crankshaft and a few other moving parts which need lubrication.  May not seem like much hassle but it can only take 1 run without oil to destroy your engine if you’re unlucky.

2 stroke engines still have a place, their lightweight, zippiness and budget friendly nature mean that they are great for small boats and portability so if you’re looking at an engine for a tender or car topper then grab a 2 stroke.

But for most of the other things that we love boats for, tubing, trawling whilst fishing, getting away from the crowds, then 4 strokes are definitely going to be worth the extra investment.  This is why we run all of our performance hire boats on 4 stroke engines, their extra reliability can also give us peace of mind that our guys are safe out on the water, especially when they’re up fishing at jumpinpin or when there’s a couple of families relying on us to make their day awesome!

With the rise in boat costs, rego, maintenance, insurance, trailers, you might find that selling your boat and turning to hiring whenever you want to head out will work better for you.  Take a look at the range available to hire here – https://coastalventures.com.au/boats-available-for-hire/